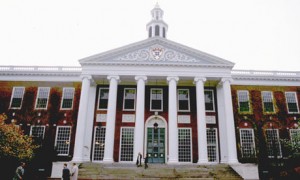 When the Financial Times (FT) released its 2020 Global MBA Ranking this week, it featured a new program in the number-one slot: Harvard Business School. The well-known program is no stranger to the FT ranking’s top spot, however, having most recently held the position in 2015. Last year’s top program, Stanford Business School, is ranked third this year, and the Wharton School of the University of Pennsylvania is second, up from fourth in 2019. Although schools based in the United States fill the ranking’s top three spots, the other programs that round out the top ten are notably international. INSEAD, which has campuses in France and Singapore, is ranked fourth, down one position from 2019. The China Europe International Business School, perhaps better known as CEIBS, remains firmly at fifth, while London Business School is seventh, down just a bit from last year’s sixth. HEC Paris is one of the most notable risers of the year—the school rose ten spots from 19th position to ninth.

The full list features many international schools that were not included in 2019’s ranking, including the Renmin University of China Business School, the Shanghai University of Finance and Economics College of Business, EDHEC Business School (based in France), and the City University of Hong Kong. Some of these programs appear for the first time in FT history. Another international school, IE Business School, experienced a notable drop this year, moving from 31 to 52—a far cry from its rank of eighth in 2017 (the program was not ranked in 2018 after the FT reported finding “inconsistencies” in the school’s alumni surveys).