Many MBA applicants feel that they are purchasing a brand when they choose a school, but the educational experience at the business school is what is crucial to your future, and no one will affect your education more than your professors. Each Wednesday, we profile a standout professor as identified by students. Today, we focus on Saras D. Sarasvathy from the University of Virginia’s Darden School of Business Administration. 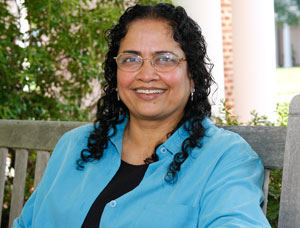 Saras D. Sarasvathy (“Entrepreneurial Thinking,” “Starting New Ventures,” “Markets in Human Hope,” and “Ethics”) wrote her dissertation at Carnegie Mellon on entrepreneurial expertise and has parlayed that into a specialization in the area of “effectuation,” which examines the creation and growth of new organizations and markets. Her book Effectuation: Elements of Entrepreneurial Expertise (Edward Elgar Publishing, 2009) examines the way entrepreneurs think. In addition to serving on the editorial boards of Strategic Entrepreneurship Journal and the Journal of Business Venturing, she acts as an advisor to education programs on entrepreneurship in Asia and Europe. In December 2010, Darden awarded Sarasvathy a Wachovia award for excellence in research development. Earlier, in September 2007, Fortune Small Business magazine named Sarasvathy one of 18 top professors in the field of entrepreneurship.

Students we interviewed feel that Sarasvathy, who has been an associate professor at Darden since 2004, is one of the up-and-coming scholars of entrepreneurship in the world. One alumnus described her to mbaMission as “very encouraging, supportive. She allows people to share ideas rather than looking for the right answer.” Another told us that he found himself in her “Starting New Ventures” class by mistake; he had lingered too long in the classroom after his previous class had ended and was still there when Sarasvathy’s class began. He was so impressed by her teaching that he added her course to his schedule, even though he was already overloaded. He found even at that first lesson that she “challenged conventional beliefs,” and he was “impressed at her insights and the way that she articulated basic assumptions to bring out the less obvious, deeper levels.”

Previous Entry
MBA Career Advice: Fun with Behavioral Questions 3
Next Entry
Your Dream MBA: 5 Steps to Getting In Webinar Series