Many MBA applicants feel that they are purchasing a brand when they choose a school, but the educational experience at the business school is what is crucial to your future, and no one will affect your education more than your professors. Each Wednesday, we profile a standout professor as identified by students. Today, we focus on Sankaran Venkataraman from the University of Virginia’s Darden School of Business Administration. 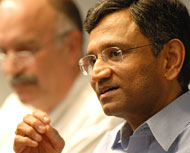 Sankaran Venkataraman (“eStrategy” and “Introduction to Entrepreneurship”)—who is known around the campus of the University of Virginia’s (UVA’s) Darden School as simply “Venkat”—is an internationally recognized expert on entrepreneurship. He is the MasterCard Professor of Business Administration at Darden and the senior associate dean for faculty and research. He has edited the Journal of Business Venturing and consulted to the U.S. Department of Commerce on promoting entrepreneurship globally. He is also a coauthor of The Innovation Journey (Oxford University Press, 2008) and coeditor of Entrepreneurship in Emerging Regions Around the World: Theory, Evidence, and Implications (Edward Elgar Publishing, 2008). Venkat earned one of Darden’s awards for most outstanding faculty in 2008 and is generally considered one of the school’s most popular professors. In January 2010, Venkat earned the Academy of Management’s Decade Award for the paper published ten years earlier that has had the greatest impact on scholarship in the fields of management and organizations.