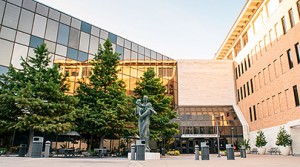 The University of Texas McCombs School of Business

For example, the school expanded its pilot program for brand management experience with Dr Pepper Snapple Group’s Yoo-hoo brand. In what is now called the Marketing Labs program, students are divided into teams of two to learn marketing skills by working hands-on for such major firms as AT&T and Dell. All first-year MBA students are eligible to apply to the program, which runs through the course of one academic year. During the 2019–2020 academic year, such companies as AT&T, Dell, ExxonMobil, and Frito-Lay are featured as partners in the program.

Another addition, the Texas Venture Labs Investment Competition, awards MBA scholarships to the winners of a start-up pitch competition, in which both admitted and prospective students can compete. The competition awards nearly $60,000 in prizes annually. In the area of nonprofit work, McCombs hosts a chapter of the Net Impact program, which affords students the chance to work on socially and environmentally responsible projects aimed at solving major societal problems. In 2014, the McCombs chapter was chosen as the Net Impact Graduate Chapter of the Year.


Another Southern institution, Emory University’s Goizueta Business School—named after late Coca-Cola CEO Roberto C. Goizueta—is deeply rooted in a legacy of global business leadership. Goizueta’s MBA program offers one- and two-year formats, strives to maintain an intimate learning environment, and offers its students the benefits of being located in a significant global commercial hub. One of the program’s notable advantages has been its success in attracting recruiters. The school’s recruiting strengths seem to be reflected in its latest employment report as well—95% of the Class of 2018 received job offers within three months of graduation and accepted positions with such major companies as Accenture, Barclays, Deloitte, Delta Air Lines, Google, Johnson & Johnson, J.P. Morgan, Microsoft Corporation, and UPS.

Previous Entry
Professor Profiles: Cameron Anderson, Haas School of Business
Next Entry
The Role of Exercise in Your GMAT Preparation