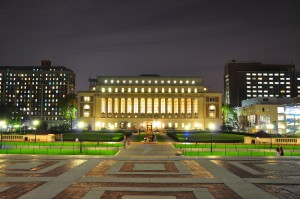 Already well known as a finance powerhouse, Columbia Business School (CBS) stepped up its finance game in 2010 with the establishment of the Program for Financial Studies. This umbrella initiative connects faculty who approach financial studies from a variety of disciplines with students, alumni, and external organizations. The program’s main goals are to support research, to enhance the CBS finance curriculum and related resources, and to create opportunities for the exchange of ideas between CBS students and faculty and members of the external finance community. The program’s case studies include “The Norwegian Government Pension Fund: The Divestiture of Wal-Mart Stores Inc.” and ”

The structure of CBS’s core curriculum has also evolved—the school’s first year was at one time very rigid, and all first-year students took all core courses with their cluster unless they were able to pass an exemption exam. Students complained, however, that this inflexible system meant they could take only one elective course their first year, which could put them at a disadvantage when competing for summer internships. For example, previously, a CBS student who accepted a summer internship at a bank may have completed only one finance elective by the end of their first year, but that student’s counterparts on the internship from other schools may have taken two or three—thus potentially putting the CBS student at a disadvantage with regard to being considered for a full-time job at the end of the internship. So, after an intense process of research and evaluation, CBS launched a more flexible core curriculum in 2008.

Five years later, in 2013, CBS implemented further changes to its core curriculum, including an increased emphasis on cross-disciplinary thinking, in addition to even more flexibility. The revamped core courses also make greater use of online teaching tools in an attempt to “free up more classroom time for deeper dives and discussions,” as a 2013 Poets&Quants article explains. In the second term of the first year, students can pick three full-term electives and three half-term electives, replacing the school’s previous “flex-core” configuration and allowing students to better prepare for summer internships. In addition, students may take exemption exams in areas in which they are already proficient, thereby accessing the option to replace core courses with electives. This revised curriculum was developed in response to student feedback that a full term was not needed to cover the “core” elements in certain courses, and the change has given students significantly more flexibility in the first year.

CBS has thereby attempted to find a middle ground where students learn what the school considers fundamentals while having the latitude to specialize, and anecdotally, students have responded favorably.

For a thorough exploration of what CBS and 16 other top U.S. business schools have to offer, please check out our free mbaMission Insider’s Guides.