How Many Class of 2018 MBAs Started New Businesses?

Entrepreneurship’s popularity among MBAs has been cemented in recent years, with many top-ranked business schools increasingly emphasizing relevant studies and experiential learning possibilities in their curriculums. For example, approximately 7% of each Harvard Business School (HBS) graduating class in the past decade skipped the traditional job search and instead started their own business. We examined the leading programs’ employment reports for the Class of 2018, which graduated last spring, to see which freshly minted MBA classes featured the highest number of new business founders. Of course, the size of each graduating class makes directly comparing the numbers difficult, but our chart offers an idea of which schools appear to spark the entrepreneurial fire within students—or, perhaps, attract more entrepreneurship-minded applicants than others. 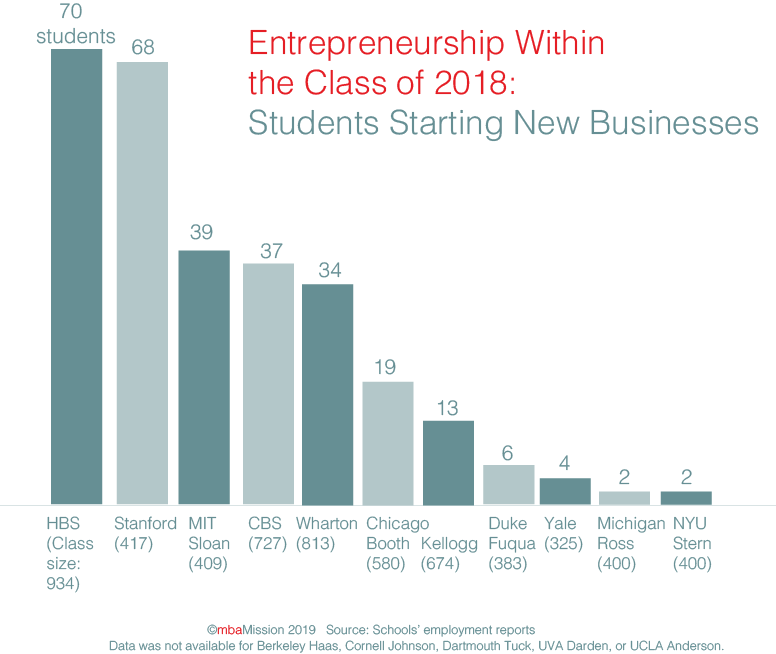 Within the Class of 2018 at HBS, 70 students (7.5% of the 934 graduating students) planned to start their own business. The Stanford Graduate School of Business had 68 entrepreneurship-oriented graduates, though its graduating class was much smaller than HBS’s (417 students, making the percentage of students starting a new business 16.3%). MIT Sloan, which had a similarly midsized class of 409 students, saw 39 individuals (or 9.5%) go into entrepreneurship. Columbia Business School (CBS) and the Wharton School of the University of Pennsylvania boasted fairly large graduating classes (727 and 813 students, respectively, in 2018) and sent similar numbers of students into the world of start-ups: 37 (5.1% of the class) at CBS and 34 (4.2%) at Wharton.