Campus Facilities and Development at Duke Fuqua and MIT Sloan 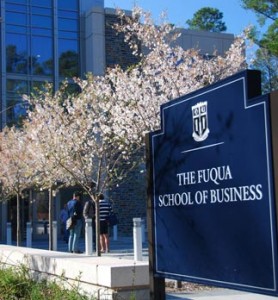 The Fuqua School of Business is located on Duke University’s West Campus near the intersection of Science Drive and Towerview Drive. Students often congregate in the Fox Student Center, a 70,000-square-foot facility that was built in 2002. Linking the main wings of the school and featuring a café, enormous windows, and a spacious indoor winter garden, the Fox Student Center is the hub of the school. Students can eat breakfast and lunch there, grab a coffee, conduct team meetings, or just take a breather between classes or during the 15-minute break in each class period.

In August 2008, Fuqua opened the 91,000-square-foot Doug and Josie Breeden Hall, the “new front door of the School for students and visitors,” as it was described in the student newspaper, the Fuqua Bulletin. Named after former dean Douglas Breeden (2001–2006), the building boasts a three-story atrium, two auditoriums (which seat 126 and 146 people), the expanded Ford Library, three 70-seat lecture rooms, and a suite of team rooms.

All told, Fuqua’s campus covers nearly 500,000 square feet, with 58 team rooms, 10 classrooms, and 7 seminar rooms. In 2015, the school undertook a major renovation project for the R. David Thomas Executive Conference Center, turning it into the JB Duke Hotel. The hotel, which officially opened in January 2017, encompasses the Thomas Executive Conference Center as well as more than 90,000 extra square feet, including nearly 200 hotel guest rooms—some of which are occupied by the school’s executive students, who stay at the hotel during their residencies at Fuqua. The hotel is connected to the main Fuqua campus by a footbridge. 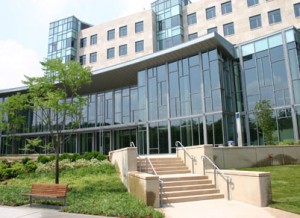 In 2006, MIT’s then president Susan Hockfield announced a major campus development program that would invest approximately three-quarters of a billion dollars in new and renovated facilities on the school’s 154-acre Cambridge campus, and which included the Sloan School Expansion. This expansion added a new classroom building, E62 (address: 100 Main St.), with approximately 210,000 square feet of space that houses 205 offices, 6 classrooms, more than 30 group study rooms, a dining area, an Executive Education suite, lounge areas, and new, usable outdoor spaces. It was completed in time for the start of classes in fall 2010 and dedicated in May 2011, to coincide with MIT’s 150th anniversary. Another MIT Sloan building, E52, was closed for construction in 2013 and reopened in January 2016. The building features many of the school’s administrative offices, a conference center, and the Department of Economics.

The classroom building, E62, is described on the MIT website as “the ‘greenest’ building at MIT.” A student from the Class of 2012, the first class to enter Sloan after the new building opened, described E62 to us at mbaMission as “the social hub at Sloan. It’s where students meet to socialize, eat—the cafeteria provides some of the best food in the neighborhood—and work on class projects. It’s probably one of the more significant things Sloan has done recently, as it provides the ideal networking space not only for students but also for the many professionals who come to check out the new building and recruit MBAs. The new building really adds to the Sloan experience, and I can’t imagine life before it!”

For a thorough exploration of what Duke Fuqua, MIT Sloan, and other top business schools have to offer, please check out our free mbaMission Insider’s Guides.