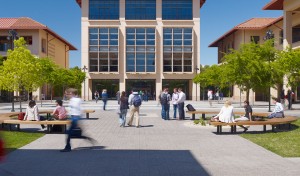 Bloomberg Businessweek released its 2018 ranking of U.S. MBA programs last week with a new name in first place: the Stanford Graduate School of Business (GSB), which claimed the top spot for the first time in the survey’s 30-year history. The GSB, which was ranked fifth in 2017, was the only school this year to receive a perfect 100.0 point score. This overall score is calculated from the scores the school receives from students, alumni, and recruiters with respect to such factors as compensation, learning, networking, and entrepreneurship. The Wharton School of the University of Pennsylvania stands at second in the ranking with a 92.6 overall score, while Harvard Business School rounds out the top three with a 91.9 score. Last year, Harvard and Wharton were ranked first and second, respectively.