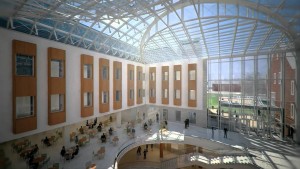 Although Olin is a smaller sized program (145 full-time MBA students in the Class of 2019) and is noted for its highly collaborative culture, the expansion allows the school to grow its class size while providing more space and resources.

One of Olin’s older buildings, Simon Hall, was first opened for use in 1986 and underwent major renovations in spring 2014. The renovation project was completed in two phases and ultimately finished in fall 2015. The building now features six new classrooms, a marketing research lab, lounge areas, and an improved auditorium.

In addition to its constantly improving facilities, Olin may be well positioned to tap into St. Louis’s burgeoning start-up sector. According to a 2013 report by the career hub Dice, “The number of St. Louis–based technology jobs posted on Dice jumped 25 percent year/year. And those new tech jobs are coming at a higher price tag too: average tech salaries are up 13 percent year/year to $81,245. … St. Louis is becoming a start-up town.” In Dice’s 2017 report, year-to-year change was more modest at 3.1%, but the average annual salary in the technology field had climbed to $83,717.