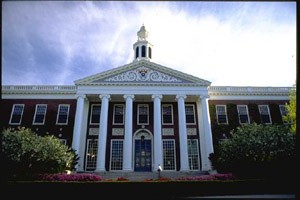 Business school and MBA program rankings are followed closely by both hopeful and current students, with such publications as The Economist, Bloomberg Businessweek, and U.S. News & World Report typically considered to offer the most prestigious lists. While treading through the sea of various rankings, however, one might wonder: if the top lists were combined, which school would be number one?

Business and management education Web site Top Management Degrees did just that and examined data from the rankings of Forbes, the Financial Times, Eduniversal, and the three aforementioned publications to rank 450 U.S.-based business schools. Harvard Business School was ranked number one with a score of 99.25 out of 100. Stanford Graduate School of Business came in second with a 95.61 score, and the University of Chicago Booth School of Business rounded out the top three with 95.41.

The rest of the top ten included such schools as the Yale School of Management, the Kellogg School of Management at Northwestern University, and Columbia Business School. Some highly prestigious institutions, however, were lower on the list—the Wharton School of the University of Pennsylvania, for example, was ranked 15th overall. Of course, applicants should take all rankings with a grain of salt and, instead of valuing them highly in the decision-making process, approach them as what they actually are—opinions, not truths!

Previous Entry
Friday Factoid: “Doing Business in…” at NYU Stern
Next Entry
MBA Admissions Myths Destroyed: I Can Use the Same Essay for Multiple Schools