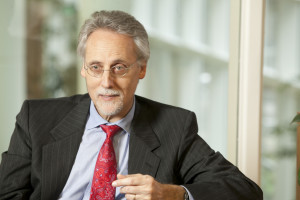 Business school deans are more than administrative figureheads. Their character and leadership often reflect an MBA program’s unique culture and sense of community. Periodically, we profile the dean of a top-ranking program. Today, we focus on William Boulding at Duke University’s Fuqua School of Business.

In the fall of 2011, William Boulding became dean of Duke University’s Fuqua School of Business. Boulding began teaching at Fuqua in 1984 and served as the business program’s deputy dean before being appointed to a shortened two-year term as dean (a full term is five years) upon the previous dean’s departure. Then in early 2013, an international search committee recommended that Boulding continue his deanship for an additional five years. He has received several distinctions for his teaching in the areas of management, marketing, and strategy, including the school’s 1989 Outstanding Teacher Award and the 1997 NationsBank Faculty Award. A member of the search committee stated in a 2013 article in Duke’s student newspaper, The Chronicle, that Boulding’s vision for the school would “address globalization with more innovation and modernization in the classrooms, while also focusing on stabilizing the school’s budget.” Another search committee member noted in the article that Boulding “has the whole package, plus he knows Fuqua and Duke intimately.”

For more information about Duke Fuqua and 15 other top-ranked business schools, check out the mbaMission Insider’s Guides.