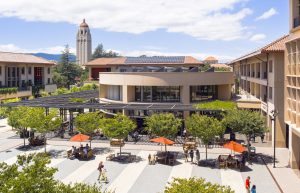 The Financial Times Top MBAs for Entrepreneurship ranking has only existed for two years, but one thing seems clear: the Stanford Graduate School of Business (GSB) reigns. The school recently claimed the top spot in the publication’s ranking for the second year in a row, leaving behind such renowned institutions as the Wharton School of the University of Pennsylvania (seventh) and London Business School (ninth). The F.W. Olin Graduate School at Babson College, which is well known for its entrepreneurial offerings, came in second place, while the University of Virginia Darden School of Business took the third spot.

Perhaps due to their location near the Silicon Valley, California-based business schools were heavily represented in the top ten. In addition to the GSB at number one, the UCLA Anderson School of Management and the Haas School of Business at the University of California, Berkeley, came in fifth and sixth, respectively. Although the top ten programs were largely based within the United States, three European schools were included. In addition to London Business School in ninth place, IE Business School and Iese Business School, both located in Spain, were ranked eighth and tenth, respectively.