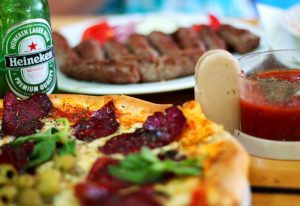 Every Thursday evening, a large number of MBA students at the University of Pennsylvania’s Wharton School head to Wharton’s MBA Pub, where they can enjoy unlimited free beer and pizza (with an annual membership). In 2013, the school moved MBA Pub, which was formerly housed in its own designated space in Steinberg-Dietrich Hall, to a new off-campus facility at the historic Armory building in Center City, thereby making the event more proximal to where the majority of students live. Because Wharton has no classes on Friday, Pub—as it is commonly called—serves as an ideal way for many students to mark the end of the academic week, kick off the weekend, and catch up with classmates and professors (who can be invited as guests).

Pub’s food offerings, drink selection, and decorations vary each week throughout the year, depending on which campus group is the week’s sponsor—though beer and pizza are staples. The event also features a variety of special events and social functions, which in 2015 included the Grand Bazaar, at which members were able to buy and sell furniture and other goods as well as take part in a charity fundraiser. Pub is obviously separate from Wharton’s academic and recruiting offerings, but according to those with whom mbaMission spoke, many students and alumni consider it an emblematic experience of the program.

For in-depth descriptions of social and community activities at Wharton and other top MBA programs, check out the mbaMission Insider’s Guides.