Beyond the MBA Classroom: Winning the Golden Briefcase 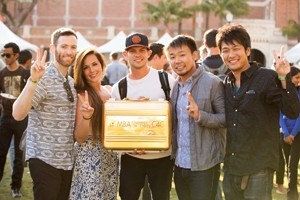 Founded by a Stanford Graduate School of Business (GSB) student in 1984, Challenge for Charity (C4C) is a well-attended annual fundraiser that brings students from eight business schools across the West Coast to the Stanford campus to compete in such events as billiards, bowling, and basketball to raise money for Special Olympics and a local nonprofit organization (each participating school selects a nonprofit organization in its area to support). Students earn points by winning the competitions in which their team participates and for each hour of volunteer work they completed during the year. Students who have committed a minimum of five hours of C4C service in one year are eligible to take part in sports competitions and trivia quizzes during this two-day event, which is held each spring, for the chance to win bragging rights and the coveted Golden Briefcase award.

A first-year student told mbaMission about the “White Party,” also a C4C fundraiser, which takes place in early March: “Everyone wears white and raises a bunch of money for charities … Students offer whatever they can, and others bid, so it’s another good way for folks to interact more. Some examples that I can remember were cooking classes, a class on how to make sushi, other learning-type experiences, and tickets to a baseball game. Everyone tries to participate. I’d guess that over 80% of the students here give back.”

For in-depth descriptions of social and community activities at the Stanford GSB, UCLA Anderson, UC Berkeley Haas, or 15 other top MBA programs, check out the mbaMission Insider’s Guides.