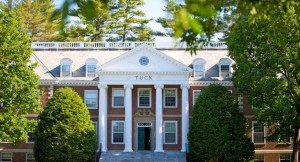 The Tuck School of Business at Dartmouth has roughly 9,500 living alumni, and although that figure may sound small compared with a larger school’s alumni base, numerous students and graduates we have interviewed report that Tuck has an active and close-knit alumni community. Through their continued involvement with the school as mentors, visiting executives, recruiting contacts, and internship providers, Tuck alumni maintain an open channel between the MBA program and the business world. Tuck students with whom we spoke could not say enough about the strength of student-alumni interactions, emphasizing that the vitality of Tuck’s close-knit community endures long after graduation.

One second-year student shared that he had had pretty high expectations with regard to the school’s alumni network “but still underestimated how strong the network can be.” He explained, “The connections were instant. I received same-day responses, all the time. There is a strong pay-it-forward mentality and a genuine interest in seeing people from Tuck do well. Alums go out of their way to help with networking, job preparation, anything.”

Tuck alumni also stay connected to the school through its annual fund-raising campaign. The school reportedly boasts the highest giving rate of all U.S. MBA programs. Tuck notes that its giving rate is “more than double the average giving rate of other business schools” in an August 2015 news article on the school’s Web site and boasts, “In addition to raising a record $6.4 million for Tuck Annual Giving, 2015’s effort marked an unprecedented fifth consecutive year where greater than 70 percent of alumni participated.”

For more information on other defining characteristics of the MBA program at Dartmouth Tuck or one of 15 other top business schools, please check out the mbaMission Insider’s Guides.

Previous Entry
Diamonds in the Rough: Experiential Learning at the Carlson School of Management
Next Entry
Learn How a Friendly Bet Led David Greenberg to Found Updater