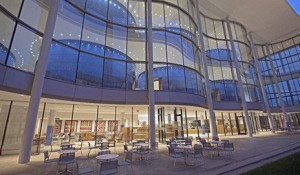 A recent article published by the Wall Street Journal (WSJ) offered fascinating insight into the Yale School of Management (SOM). Applications at the school are up by 30%, yet such changes as a new, state-of-the-art campus building and a 40% increase in enrollment have raised concerns among some students and faculty members. The SOM has traditionally been a fairly small, intimate program, and recent expansions have evoked questions regarding whether the school is becoming “too corporate.”

Changes are evident in the form of Edward P. Evans Hall, the school’s new home, for example. This modern building made largely of glass is quite a contrast to the cozy, mansion-like classrooms with fireplaces to which some students had become accustomed. “A big, fancy, new, shiny, modern building attracts different students than cozy houses,” an alumnus commented to the WSJ. SOM Dean Ted Snyder approached the concerns calmly, stating “We’re not as small as we used to be and I don’t think we’re as quirky as we used to be.” He added, “Leaders are much more likely to come out of a place that is connected globally.”