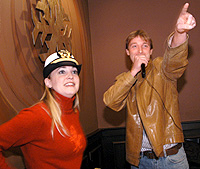 Twice a year, in the fall and the spring, MIT Sloan students organize charity auctions. Each “ocean” (the 68-person cohort with which students take their first-semester core classes) selects a charity to support and identifies items to be auctioned, such as lunch with a professor, a home-cooked meal by a student, and more unusual offerings, like having a professor chauffeur you to class in his classic car. First-year oceans compete to see which one can raise the most money, and second-year students organize a similar auction. All together, the auctions raise tens of thousands of dollars each year for such charities as the California Wildfires Fund, Children of Uganda, Pencils of Promise, Bridge Over Troubled Waters, and the Sloan Social Impact Fellowship.

As you submit your application to Sloan, you may want to consider what you can offer up for auction and start preparing to bid!

For more information on other defining characteristics of the MBA program at MIT Sloan or one of 15 other top business schools, please check out the mbaMission Insider’s Guides.

Previous Entry
Diamonds in the Rough: Southern Methodist University’s Cox School of Business
Next Entry
MBA Admissions Myths Destroyed: My High GMAT Score Will Get Me In!