Beyond the MBA Classroom: The HBS Show 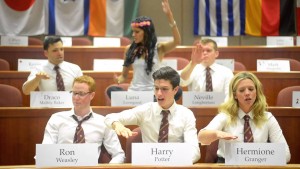 First presented at Harvard Business School (HBS) in 1974, the HBS Show is a popular student-run comedy production that follows the tradition of Harvard University’s Hasty Pudding Show and Harvard Law School’s Parody. This extremely well-attended show is a major production that pokes fun at life at HBS, incorporating joking—but good-natured—references to case protagonists, professors, administrators, and the recruiting process. A spouse of one HBS student who helped organize a past production wrote on her blog, “It was a great outlet for business school students to roast their own school—the whole performance was based on The Godfather but with a zillion HBS inside jokes thrown in.” Featured among the HBS Show film productions in 2015 was a parody of the Harry Potter films, titled “Harry Potter and the Classcard of Secrets.”

For in-depth descriptions of social and community activities at HBS and 15 other top MBA programs, check out the mbaMission Insider’s Guides.