With regard to the GMAT, raw intellectual horsepower helps, but it is not everything. In this blog series, Manhattan Prep’s Stacey Koprince teaches you how to perform at your best on test day by using some common sense. 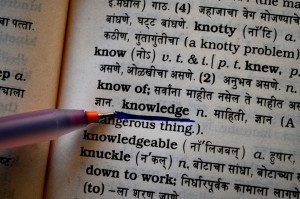 Many of the more “standard” (and lower-level) Sentence Correction (SC) questions have easier-to-identify “splits,” or differences in the answer choices. For instance, answers A and B might use the word “have,” while C, D, and E use the word “has,” indicating a relatively easy-to-spot singular versus plural issue.

Sentences with longer underlines, however, are more likely to be testing such global issues as Structure, Meaning, Modifiers, and Parallelism. In these questions, large chunks of the sentence move around, the fundamental sentence structure changes, and so on. In one GMATPrep problem, for example, answer A includes the text “the brain growing in mice when placed” while answer B says “mice whose brains grow when they are placed.” This is not just a simple switch of a single word—something more complicated is happening. Take a look at this article for the full example.

To have a chance at answering these correctly, we may need to modify our standard approach to SC. In GMATPrep’s Lake Baikal problem, the entire sentence is underlined, and the answers seem to be changing completely around. Where do we even start? Click the link to try the problem and learn more about how to tackle these types of SCs. Here is another one discussing an organization called Project SETI.

When you are starting to feel more comfortable with those, I have an exercise for you. Pull up some long-underline Official Guide questions that you have previously completed. Cover up the original sentence and look only at the answers (in other words, if the entire sentence is not underlined, then you are going to do this exercise without actually reading the full sentence!).

Based on the differences that you see, try to articulate all of the issues that are being tested and eliminate as many answers as you can. (Note: You will not always be able to eliminate all four wrong answers; sometimes the non-underlined portion of the sentence contains some crucial information!) When you are done, look at the full thing and review the explanation to see how close you got and whether you missed anything.

Previous Entry
MBA Admissions Myths Destroyed: I Am Too Old To Get Into Business School!
Next Entry
In Other News… The Benefits of a Self-Paced Program — and an MBA for Kids!