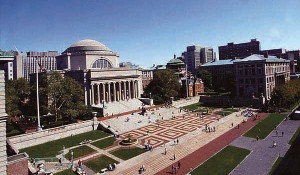 Although summer seems to have just ended, first-year Columbia Business School (CBS) students have only a few short months before they enter the last big push of their first semester in December, with finals wrapping up and the next semester not beginning until mid-January. The end of regular classes at the school is traditionally marked by CBS Follies, a student-run comedy and entertainment show, as well as an End of Semester Party, and those looking to stay involved with CBS and their classmates during the holiday break have plenty of opportunities to do so. Many students go abroad during the break to such places as Korea, Brazil, and Australia on Chazen Study Tours or as part of consulting projects through the International Development Club. And students wishing for a complete break from the classroom can take part in the Snow Sports Club’s annual Winter Ski Trip in early January. Although the long break can offer a welcome rest from the stress of first-semester classes, recruiting season for first years begins once they return to campus for second semester. So, one way or another, this is a good time for CBS students to clear their heads.

For more information on CBS or 15 other leading MBA programs, check out the mbaMission Insider’s Guides.