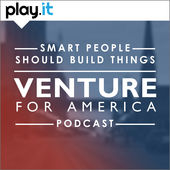 In the eleventh episode of the podcast series, Shinewald welcomes Orbital founder and self-described “fun guy” Gary Chou. Orbital, which Chou defines as “a space to do awesome stuff,” aims to help people develop side projects by offering programs, boot camps, one-on-one sessions, and community support. Chou knows a thing or two about doing “awesome stuff”; his resume includes everything from producing films, to working as a general manager at venture capital firm Union Square Ventures, to serving on the executive board of Venture for America—all before Orbital even saw the light of day. In this fascinating installment of the podcast series, Chou discusses these stories and more:

Subscribe to the podcast series to get a front-row seat as entrepreneurs such as Chou share their stories of struggle and success!