Business school deans are more than administrative figureheads. Their character and leadership often reflect an MBA program’s unique culture and sense of community. Today, we focus on Sunil Kumar from the University of Chicago Booth School of Business. 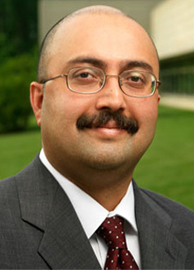 Before his appointment as dean of Chicago Booth in 2011, Sunil Kumar served for 14 years on the faculty of the Stanford University Graduate School of Business, where he was also senior associate dean for academic affairs. Kumar received a PhD in electrical engineering from the University of Illinois at Urbana-Champaign, a Master of Engineering in computer science and automation from the Indian Institute of Science, and a Bachelor of Engineering from Mangalore University. He has been the recipient of numerous honors for his teaching and research in the area of operations management and communications networks, including the 1998 Finmeccanica Faculty Scholarship from Stanford University and the 2001–2002 Professor of the Year award at the Indian School of Business. In August 2015, Kumar was appointed for a second five-year term as the dean.

“I think he actually fits the personality of Chicago pretty well, because, in a sense, he’s kind of nerdy and quantitative, but at the same time, he’s pretty funny,” stated a 2012 Chicago Booth graduate we interviewed. “His personality really came out during our student events, and I would just say that he is very approachable and a ‘real’ person.”

For more information about Chicago Booth and 15 other top-ranked business schools, check out the mbaMission Insider’s Guides.