Some people may be surprised to see the Rady School of Management at the University of California (UC), San Diego—which stands modestly at number 51 in Bloomberg Businessweek’s 2014 overall MBA rankings—besting the likes of such top-tier Ivy League titans as Harvard Business School (HBS) in the area of intellectual capital. Although HBS’s number-eight position according to this measure could perhaps be explained by the program’s emphasis on publishing case studies rather than scholarly articles (the former are not considered in Bloomberg Businessweek’s tabulation of research), the list is nonetheless interesting in the variety of schools represented.

According to Bloomberg Businessweek, the Rady School boasted the most prolific business faculty in the United States in 2014. Earning top billing for intellectual capital is an honor that “is quite impressive for a business school that was established only a decade ago,” observes UC San Diego Chancellor Pradeep K. Khosla. The business school’s dean, Robert S. Sullivan, commented that the distinction is “a direct consequence of the Rady School’s successes in recruiting world class faculty.”

In fact, Bloomberg Businessweek’s overall ranking is calculated as an aggregate of three factors, of which intellectual capital carries the least weight: 45% of the overall ranking is determined by recruiters’ feedback on recent MBA hires, another 45% is determined by reviews from graduating MBAs of their respective programs, and just 10% is accounted for by intellectual capital, which marks the volume and quality of faculty publications in leading business journals within the past five years.

Unless you are pursuing a PhD, faculty research output is probably not a foremost concern when looking for the best return on your business school investment. Still, Bloomberg Businessweek’s tally of scholarly contributions does provide a more heterogeneous view of the leading MBA programs—revealing that important intellectual activity is being conducted at schools that might be otherwise eclipsed on the usual top-ten lists. 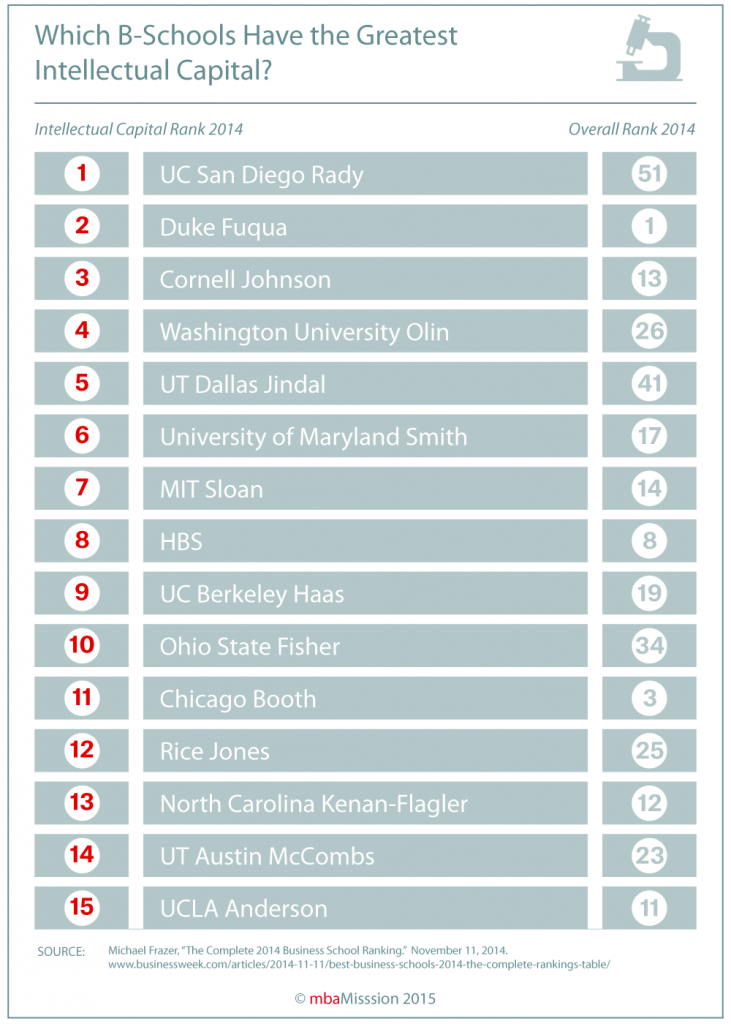