One month deep into the new year, and Columbia Business School (CBS) has climbed its way to the top of our ongoing Social Currency Ranking, boasting the highest sum of business school mentions in the New York Times society pages for January 2015. Of the 49 wedding announcements in our new year-to-date tally, more than one-fifth (11) mentioned one or more MBAs. Compared with the January kickoffs of our two previous annual rankings, this year was exceptional in that it did not include any students or graduates of the Wharton School at the University of Pennsylvania, a program that produces a large volume of MBAs each year. By contrast, Wharton had tied with CBS in January 2014 for having the most mentions and led the rankings at the start of 2013.

This year, CBS accounted for six of the newlyweds mentioned, including first year Lauren Gentry, who met her husband Alidad Damooei when they were both undergraduates at Columbia; Christopher Valentine, an associate director with Standard & Poor’s, who married NYU Stern alumna and La Guardia Airport ground transportation services supervisor Kelly West; and Jacqueline Korenthal, a management consultant at PricewaterhouseCoopers, who married Cornell Johnson alumnus and investment banking associate Brian Swanson.

Other notable MBA weddings mentioned in the past month include that of Harvard Business School second-year student Grier Tumas to Jonathan Dienstag and that of Northwestern Kellogg alumni Lindsay Potanka and Matthew Fitzgerald.

The totals for each school may seem somewhat unimpressive this early in the game, but we will continue to track wedding announcements throughout the year, watching for emerging trends among the MBA world’s most upwardly mobile alumni. 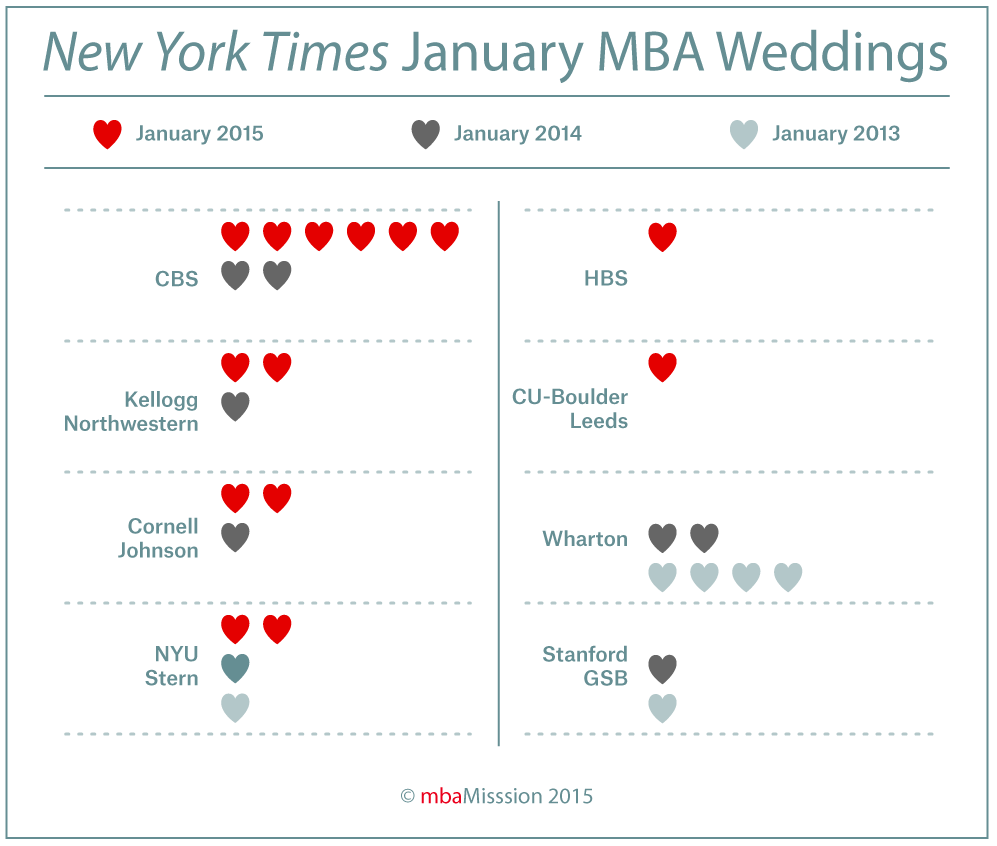