B-School Chart of the Week: Is Gender a Roadblock to Equal MBA Pay?

If you are a woman aiming to advance your career—and improve your salary—in a landscape of hidden biases and persistent wage inequality, simply checking the average graduate compensations the various business schools report may not give you the full picture.

Earning an MBA from an elite program can be a smart way to gain an edge, but that MBA salary bump the schools’ career reports suggest often disproportionately benefits men, a fact that warrants greater attention, especially from female prospective students weighing their expected investment against potential payouts.

For example, graduates of the Stanford Graduate School of Business (GSB)—one of the country’s top business schools, according to Bloomberg Businessweek’s 2014 survey of MBA programs—reported the most dismal figures in terms of equal pay, with women earning a full $52,000 less per year than their male counterparts. Given the cost of attendance (which, at $126,750 per year, is one of the highest), men in the GSB’s Class of 2014 seemed to fare far better with respect to their MBA investment. The University of Pennsylvania’s Wharton School, despite boasting one of the best female-to-male student ratios in the country among the top-ranked programs (the Class of 2016 is 40% women, down from 42% for the previous class), similarly reported a broad wage gap in its post-MBA compensation. Wharton’s female graduates earned, on average, $20,000 less than the school’s male graduates in 2014.

Of course, many variables could account for differences in pay from school to school in any given year, ranging from the prevalence of more male-dominated career paths to the quality of career services and the types of companies that recruit students. Wharton may have a more evenly divided student body, but its output of high-grossing professionals in the area of finance—an industry noted for its gender problems—likely remains skewed in favor of men. The data nonetheless clearly show that for the equal rigor and merit of their education, women generally earn less than their male classmates coming directly out of business school.

The disparity is deeply frustrating, but not all hope is lost. In this week’s chart, we highlight ten elite programs at which female members of the Class of 2014 reported the most equitable (if not better) compensation relative to their male classmates.

At UVA Darden and Cornell Johnson, men and women earned roughly equal compensation. Harvard Business School (HBS), a school that has taken pains to promote gender equality and, like Wharton, that boasts a high female-to-male ratio among its students (41% in the Class of 2016), actually saw its female graduates earn slightly more than its male MBAs.

For details about clubs, networking opportunities, and social programs for women and other underrepresented groups at the leading MBA programs, see our mbaMission Insider’s Guides. 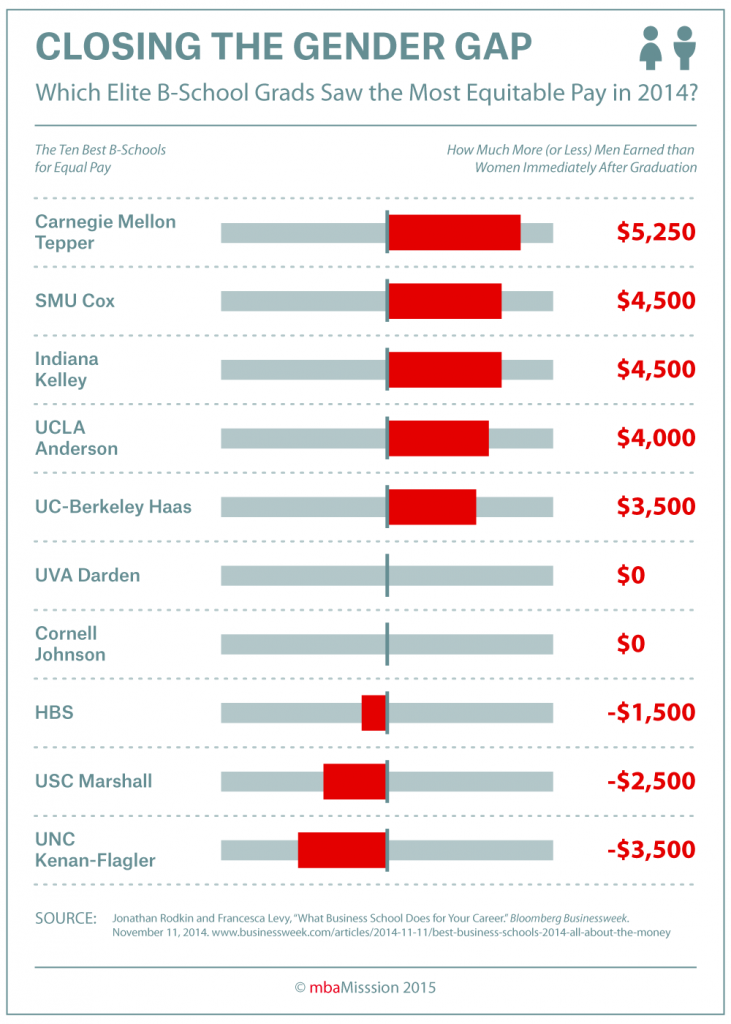