Business school deans are more than administrative figureheads. Their character and leadership is often reflective of an MBA program’s unique culture and sense of community. Each month, we will be profiling the dean of a top-ranking program. Today, we focus on Glenn Hubbard from Columbia Business School (CBS). 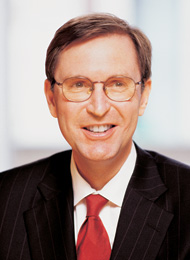 Glenn Hubbard was appointed dean of CBS in 2004, having been at the school for nearly 20 years and having served as the Russell L. Carson Professor of Finance and Economics, the school’s senior vice dean, and codirector of the entrepreneurial program. He is also well known for having been an economic advisor to Mitt Romney’s presidential campaign in 2012 and a leading designer of the 2003 Bush tax cuts, which he helped implement while chairman of the U.S. Council of Economic Advisers.

After being criticized for his ties to the financial services industry in the 2010 documentary Inside Job, Hubbard has made a more concerted effort to bring professional responsibility to the fore of the CBS curriculum and to require faculty to fully disclose their professional activities outside of teaching. While many business schools responded to the recent financial crisis by adding standalone ethics courses to their curricula, Hubbard told the Wall Street Journal in 2011, “I don’t think students pay attention to [ethics] the way they do when it’s integrated into your marketing course, into your operations course, into your finance class.” With the launch of a new flexible curriculum in 2008 and further curricular changes in 2013, the school has reportedly worked to incorporate this integrated approach to teaching ethics directly into its core components. The updated curriculum also engenders what Hubbard has promoted as the three most essential directives for business students: “analyze, decide, and lead.”

Previous Entry
MBA Career Advice: Prepare for the Worst and Be Early
Next Entry
B-School Chart of the Week: More MBA Jobs and Higher Salaries in 2015?