B-School Chart of the Week: More MBA Jobs and Higher Salaries in 2015?

Last week, the Graduate Management Admission Council (GMAC)—the organization that administers the GMAT exam—released the summary results of its annual employer survey. Second-year MBA students hitting the job market in a few months will be especially happy to learn that job prospects appear to be improving.

Indeed, the forecast looks promising for 2015 MBA job seekers, and it seems consistent with the larger economic picture as well. According to a report released by the Bureau of Labor Statistics on Friday, approximately 246,000 jobs, on average, were added monthly in 2014, making the past year the best one for employment since 1999 (at least in the private sector).

In addition to better employment opportunities, the GMAC survey revealed a promising outlook for increased compensation for newly hired business school graduates. Just under one-half of the 169 employers polled said they anticipated raising base salaries to match inflation, and 18% intended to boost salaries even higher than that.

As Bloomberg Businessweek notes, employers questioned by GMAC seemed to favor the MBA over other graduate degrees: “Specialized programs may be in vogue right now, cropping up at business schools around the country. But the data suggest MBAs still have a leg up on graduates of other master’s programs when it comes to demand from employers and salary outlook—at least for 2015.”

That is not to imply that earning an MBA guarantees you a job in any industry, however. The GMAC report anecdotally states that such fields as investment banking remain oversaturated with highly qualified business school graduates. Keeping up with the demand for technical skills such as data analysis also seems to be a decisive factor in maintaining job market value. As employers continue to seek more digitally skilled workers, MBAs may need to look ahead to meeting that demand. 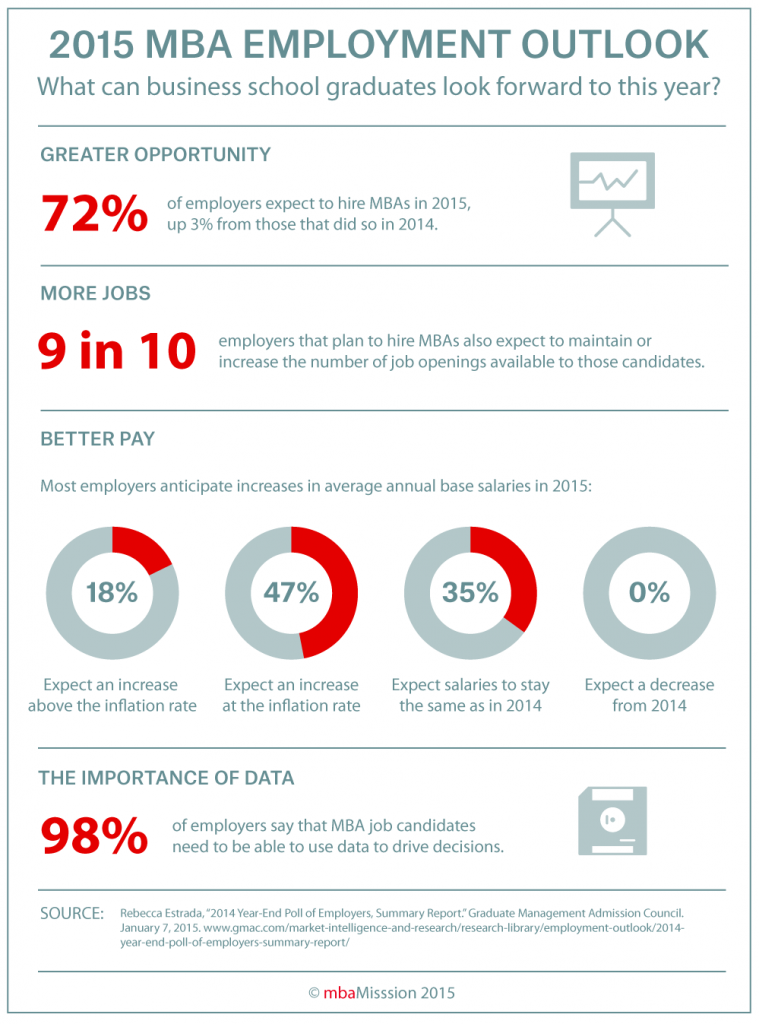