B-School Chart of the Week: Which MBA Ranking Do You Trust the Most?

We recently surveyed a number of visitors to our site to get a feel for the concerns, plans, and mind-sets of this season’s MBA applicants. Now the results are in, and for those who are curious about their fellow applicants’ views on business school, we will be sharing some of the collected data in our B-School Chart of the Week blog series.

As part of our informal survey this year, we posed the question “Which business school ranking/survey do you trust the most?” Given that Bloomberg Businessweek has long been considered by many the premier MBA ranking, we were quite surprised to see that only 5.1% of responders picked it as their most trusted source. Instead, a whopping 46.1% indicated that they view the U.S. News & World Report survey as the most trustworthy, while the Poets & Quants aggregate received the next greatest percentage of the votes, with 33.3%. With just 10.2% and 5.1% of responses, respectively, the Financial Times and The Economist rounded out the survey. 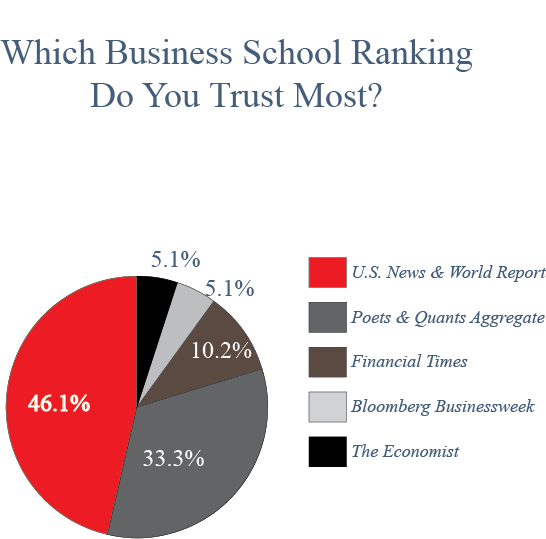 Previous Entry
Our Favorite Advice from MBA Admissions Directors, Part 2
Next Entry
Beyond the MBA Classroom: TG(IF) at Kellogg