Rankings come in all shapes and sizes, but can any ranking truly capture social cachet? For a different perspective on the value of an MBA, we turn to the New York Times society pages, where the editors profile promising couples. Each month, we dedicate one B-School Chart of the Week to tallying how alumni from top-ranked business schools are advancing their social currency ranking.

With 42 MBA mentions in 188 New York Times wedding announcements for the month of August, business school students and alumni continue to hold their own in the city’s society pages. So far in 2014, 195 of 897—or approximately 22%—of the publication’s wedding announcements have featured MBAs. This total is up slightly from the tally this time last year (August 2013), when the aggregate was 175 of 848, or roughly 20%.

Wharton and Columbia Business School (CBS) are tied for the greatest number of such mentions, with 31 each for the year, besting their respective figures for this point in 2013. While Harvard Business School (HBS) maintains its position in third place, its tally thus far for 2014 is considerably behind its aggregate August 2013 total.

Included among the notable mentions this past month were the marriages of alumni from two top-ranked French MBA programs: that of HEC Paris graduate Austin Lin to Dr. Vivian Tsai and that of INSEAD (Fontainebleau) graduate Saed Shonnar to Leila Taha. 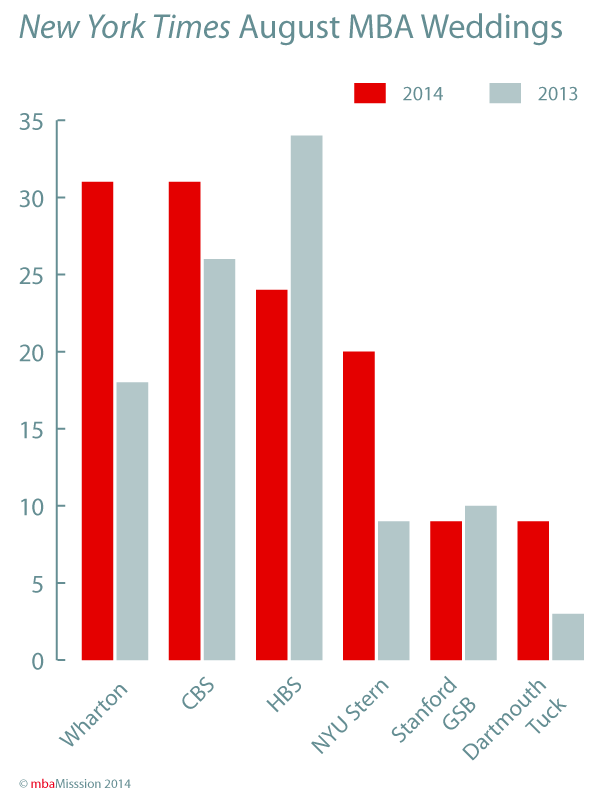