With June marking the halfway point in our 2014 tally of MBAs whose nuptials were mentioned in the New York Times wedding announcements, we present an overview of the past six months of data. The number of business school students and alumni who were highlighted in June alone—a total of 67—more than doubled our year-to-date figure, bringing the cumulative tally to 130 out of 600 weddings in 2014.

Despite the sudden leap after a relatively slow May, the year-over-year numbers for June are strikingly similar, considering the aggregate tally was 127 out of 590 weddings at the same point in 2013.

Wharton bettered CBS for the month to take the leader spot in our social currency rankings, claiming an aggregate yearly total of 24 mentions. These included the double-MBA wedding of Wharton alumnae Ginny Too and Emily McNabb, both of whom now work in the Philadelphia office of McKinsey & Company.

In addition, Dartmouth Tuck made surprising gains for June, with five mentions—the first of any for the school this year—tying with Stanford GSB. Notably, these also included some double-MBA marriages, including that of Dartmouth Tuck alumnus Matthew Woodward to Stanford GSB alumna Neha Chauhan, and that of Tuck alumnus Ryan McDonald to HBS alumna Caroline Wilson. 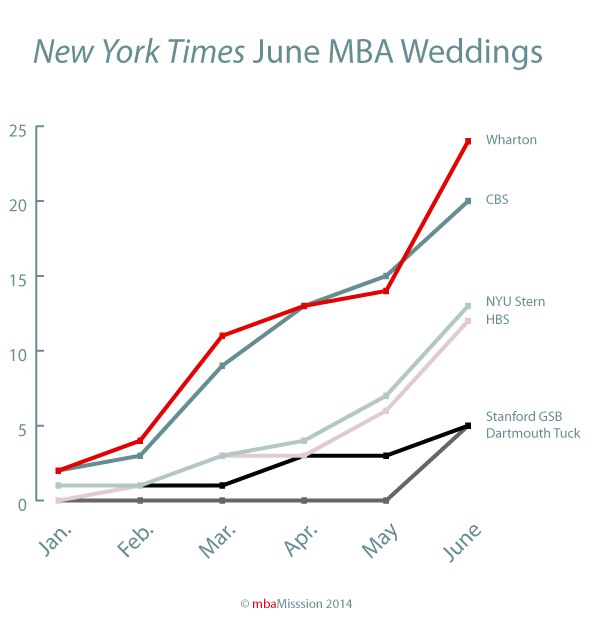 Previous Entry
Professor Profiles: Luigi Zingales, The University of Chicago Booth School of Business
Next Entry
Beyond the MBA Classroom: Life As an International Student at Fuqua