B-School Chart of the Week: May 2014 Social Currency Ranking

The end of spring brought an apparent upswing of matrimonial celebrations—though perhaps less so for business school students and alumni. MBAs were highlighted in just 15 of the 126 New York Times wedding announcements in May (up from eight out of 84 in April). Our year-to-date tally thus hits a modest total of 63 weddings involving MBAs out of 398 total in 2014. By comparison, the figures were 76 out of 383 in May of last year.

Chicago Booth also made notable gains in May, garnering its first two mentions of the year: the marriage of alumnus Lt. James Tripiano—stationed in Richmond, Virginia, after serving in Afghanistan—to Alexandra Della Rocchetta, and the wedding of alumna Mirian Pak, a director of strategic development for the digital and global e-commerce division of Ralph Lauren, to James Stillwagon Jr. 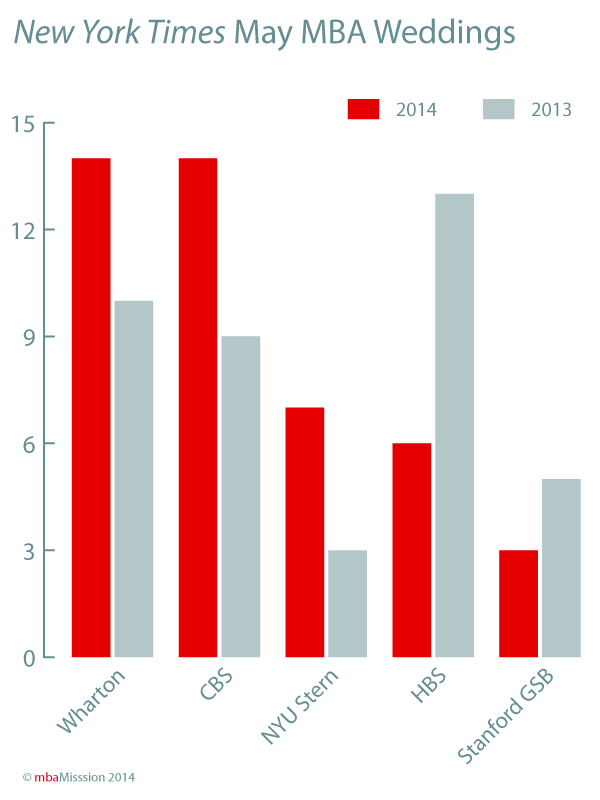 Previous Entry
Monday Morning Essay Tip: Personal, But Not Too Personal
Next Entry
Mission Admission: What Type of Candidate Are B-Schools Seeking?