B-School Chart of the Week: How Many of the 50 Richest People on the Planet in 2014 Are MBAs?

This week, Forbes released its 2014 ranking of the richest people on the planet, totaling 1,645 billionaires—up 268 over 2013’s tally. The list represents an aggregate net worth of $6.4 trillion, with the United States dominating the rankings. “Thanks to the tech boom, and strong stock market, the U.S. once again leads the world with 492 billionaires, followed by China with 152 and Russia with 111,” explains Forbes.

After losing his former first-place spot to Mexico’s Carlos Slim Helu, who has claimed it for the past four consecutive years, Microsoft co-founder and notable Harvard dropout Bill Gates once again tops the Forbes list as the world’s wealthiest person. In addition, women appear more prominently in the 2014 rankings than in past years, with a record 42 new female billionaires and a total of 172 women on this year’s list, up from 138 in 2013.

But just how many prominent billionaires hold MBAs? Among the 50 wealthiest individuals in the world, we counted six business school alumni, half of whom graduated from HBS. Two of these six billionaires were also women, perhaps reflecting the broader uptick in female representation in the rankings. 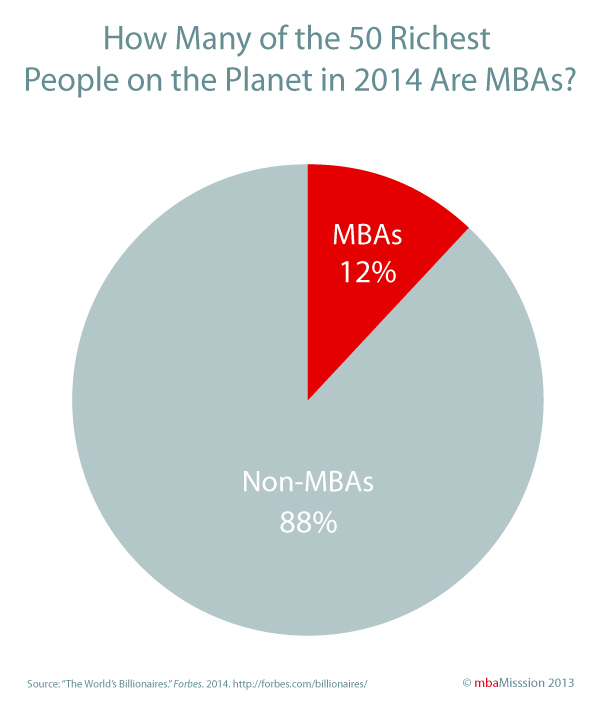 Previous Entry
Diamonds in the Rough: The Carey School of Business at Arizona State
Next Entry
Friday Factoid: Charlottesville Living at UVA Darden