In the past eight years, the two most significant changes in Harvard Business School’s (HBS’s) employment statistics for its graduating classes can be seen in the financial services and technology sectors. The number of newly minted HBS MBAs entering the industries of investment banking, sales/trading, investment management, venture capital, private equity and leveraged buyouts peaked in 2008, with the total number of financial services hires representing almost half of the program’s graduating class (45%) that year. By contrast, the percentage of graduates hired in the technology sector in 2008 was only 7%.

Predictably, the figures for finance-related hires dropped precipitously in the wake of the Wall Street meltdown, falling to 31% with the HBS Class of 2009. Among the most recent (Class of 2013) HBS graduates, however, financial services seems to have fallen even further out of favor, sinking to an eight-year low of 27%. Meanwhile, the proportion of the school’s MBAs going into technology has climbed steadily since the financial crisis to a high of 18% in 2013, perhaps reflecting growing opportunities in places like Silicon Valley and New York City’s Silicon Alley. Although the trend lines may seem compelling, note that as of 2013, approximately 50% more graduates were entering financial services than in earlier years. The technology sector is not yet poised to take over the world of MBA hiring… 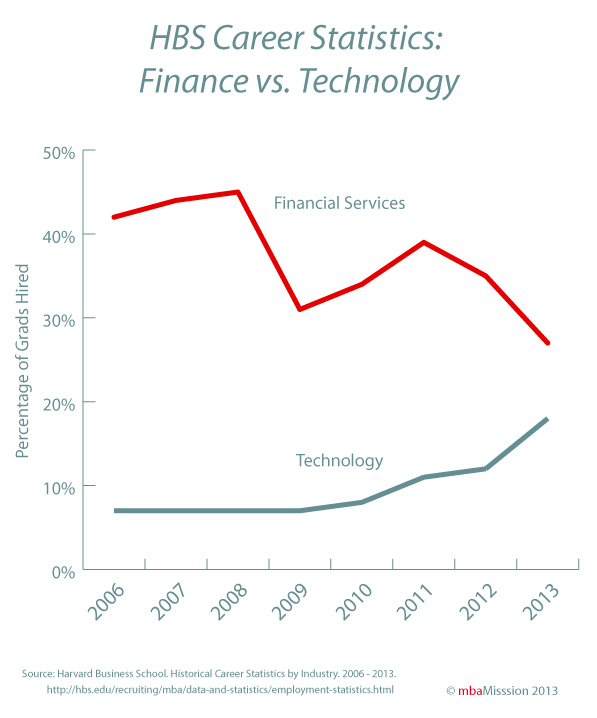