B-School Chart of the Week: When Did You Decide to Apply?

Perhaps you have had business school on your radar for quite a while. Actually committing yourself to the admissions process, however, requires some definite foresight and planning. Understandably, then, when we asked, “When did you decide to apply to business school?,” the majority of respondents said that the timing of their decision occurred more than a year before the typical start of the application season in July—42% in aggregate.

Such long-term planning appeared to be prevalent among international applicants in particular, 36% of whom indicated that they made the decision to apply more than a year in advance—while an additional 12% said that they had made the decision more than two years in advance. U.S. candidates’ most common response, on the other hand, was August to December of the previous year—six to 12 months before the beginning of application season.

Still, some applicants seem to decide to pursue an MBA within a relatively narrow time frame. Of the U.S. candidates who responded to our survey, 14% noted they made the call in July, the same month application season began (compared with only 8% of international applicants), and 7% within the three months before that, between April and June (12% of international). Taken in aggregate, comparable percentages in each group decided to apply within the same calendar year as the application deadline (36% overall, 35% of U.S. applicants and 36% international).

Although you can never really start too early or too late in preparing and optimizing your candidacy, remember that when you ultimately decide to apply to business school will determine which admissions round(s) you should target and how you will need to prioritize the various components of your application timeline. 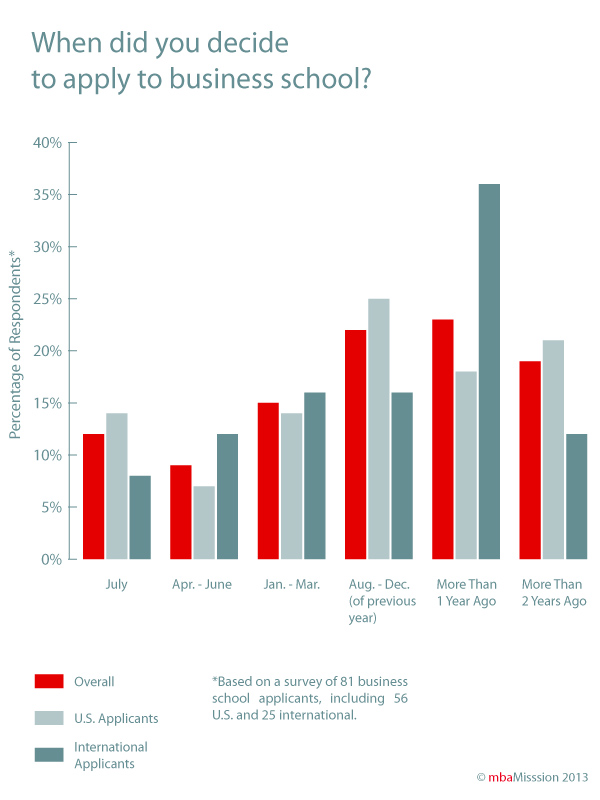