Looking back at the past year of 1,360 total New York Times weddings announcements, approximately 274 (or 20%) mentioned business school students, applicants or alumni. Perhaps unsurprisingly—given its notoriety and class size—Harvard Business School (HBS) took the lead, racking up a year-end total of 45 mentions. Top-ranked and nationally competitive programs counted for most of the schools that placed highest on our social currency ranking, with HBS followed by Columbia Business School (37 mentions), Wharton (28 mentions), NYU Stern (19 mentions) and Stanford GSB (13 mentions).

Considering that the announcements are selected by the New York Times editors, we noticed a slight bias in favor of programs based in the New York City area—with CBS, NYU Stern, Fordham and Zicklin all ranking near the top of our list. Our breakdown also shows that CBS had the greatest number of mentions for an MBA program in any single month, with 13 in June (also the most popular month for weddings overall).

Despite an overall lull in end-of-year ceremonies, several announcements from last month included newlyweds currently studying for their MBA. Gregory Elkins, for example, an MBA student at UNC Kenan-Flagler, was married to third-year UNC medical student Blair Golden. Rishi Kumar, a Chicago Booth student, married Lindsay DeHartchuck, a curriculum designer for the Relay Graduate School of Education. Richard Janczewski, a first year at the University of Connecticut, married Suzanne Manning, who is pursuing a PhD in social work at Fordham. Finally, Paul Moskowitz, in his first year at HBS, married Lara Fox, a senior investor relations associate in the New York office of General Atlantic. 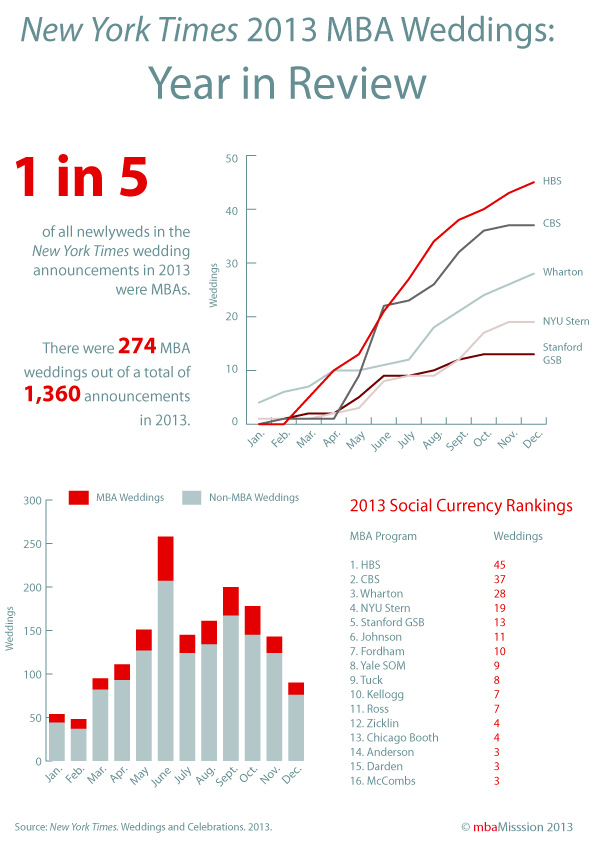 Previous Entry
Professor Profiles: Jeffrey Carr, NYU Stern School of Business
Next Entry
Beyond the MBA Classroom: Show Off Your Talent at the NYU Stern Follies