B-School Chart of the Week: The Most Generous B-School Gifts of the Year

Fundraising plays a crucial role in the business of business school, often directly influencing the overall quality of the MBA experience. “While donations are still not as easy to come by as they were pre-recession,” Bloomberg Businessweek explains, “business schools are finding that as the economy recovers, so are their endowments and fundraising efforts.”

We have put together a chart showing Bloomberg Businessweek’s roundup of the top business school donations of 2013. As you can see, these 17 schools, including both top-ranking institutions and smaller programs, received 19 gifts of $10M or more in 2013—an impressive $700M in aggregate. The majority of this year’s donors have committed their gift money to building/renovating facilities or funding curricular and research programs.

Columbia Business School (CBS) had a notably auspicious year, receiving $100M in May from alumnus Ronald Perelman to fund the Ronald O. Perelman Center for Business Innovation. The amount ties the record with Henry Kravis’s donation in 2010 as the largest sum ever given to the university. In addition, CBS received two other generous alumni donations—$25M from the chairman of JetSuite/founder of Hawkes Financial Services and $15M from the chairman/CEO of GAMCO Investors—both of which will help fund the construction of the school’s new Manhattanville campus.

Michigan Ross received a similarly generous donation of $100M from its eponymous donor, Stephen Ross. The money will reportedly go toward funding scholarships and the construction of new high-tech facilities. Carnegie Mellon’s Tepper School of Business and the Villanova School of Business rank high on the list as well, receiving gifts of $67M and $50M, respectively. Also notably generous were two significant gifts to the London Business School: $40.51M from industrialist Idan Ofer and $15.5M from entrepreneur and Jetro Holdings owner Nathan Kirsh. 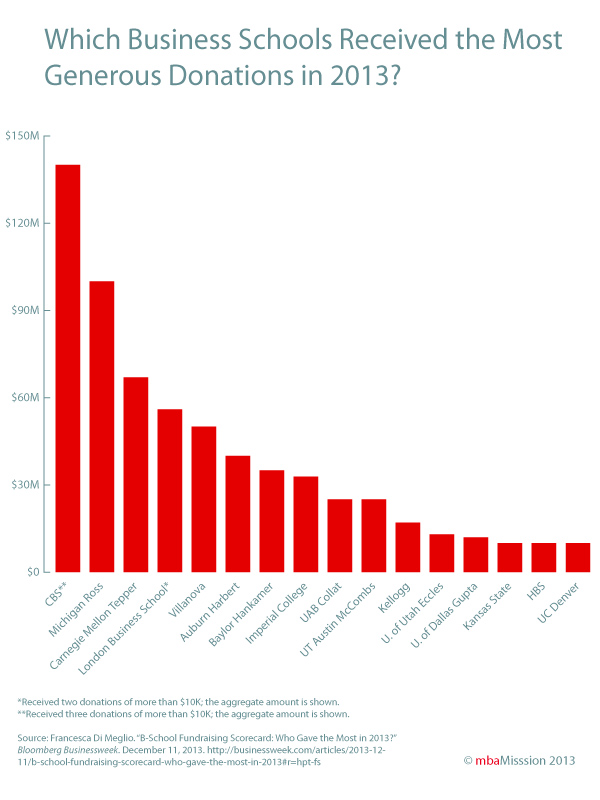