B-School Chart of the Week: What Are You Most Looking Forward to About Business School?

We heard from 94 MBA applicants—68 U.S. candidates and 26 international—on the topic of “What are you most looking forward to about business school?” The most common responses we received could be organized into three general categories: “networking/making new friends and connections,” which accounted for the majority of responses both overall and among international candidates specifically; “learning and improving skills,” which was the most common among U.S. applicants; and—not surprisingly, perhaps—“career change or progression.”

Despite the rather commonsense perception that business school is mainly about getting a new job or advancing your status in the career you already have, this latter category ranked third among the three, both overall and in each candidate group individually (discounting the “other” responses). In fact, only one international applicant (compared with ten U.S. ones) gave a response that fell into the “career change” category.

Approximately 18% of the responses did not fit into any of the three top categories (“other”) and included comments such as “time off,” “global exposure,” “being able to participate in start-up competitions” and even “more free food at events.” 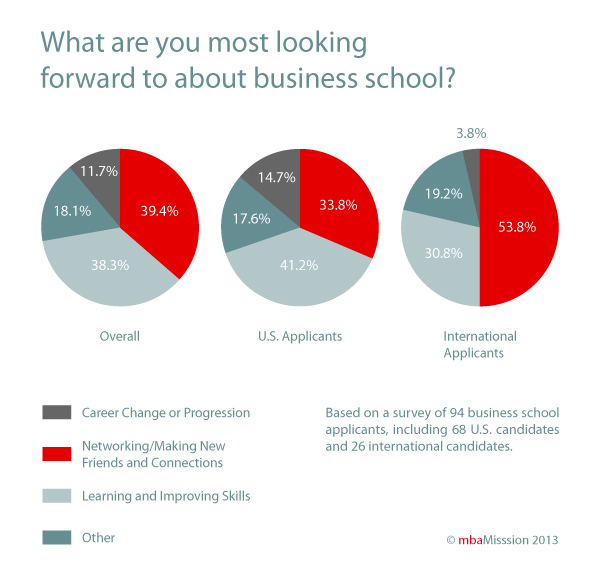