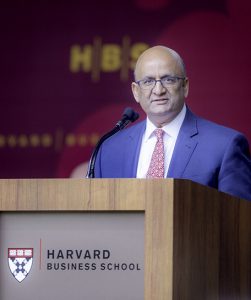 Harvard Business School (HBS) Dean Nitin Nohria surprised many last week when he announced in a school-wide email that he will be stepping down from his position at the end of June 2020. Next summer, Nohria will have spent ten years leading the business school, having assumed the role of dean in 2010. “A decade for HBS’s tenth dean seems an appropriate duration for this chapter in the School’s history,” Nohria wrote in the announcement, adding that he will take a year-long sabbatical after stepping down. Nohria did not detail his future plans further, although HBS will undoubtedly keep a door open for him—Nohria served as a professor at HBS for more than two decades before becoming dean.

HBS has logged a number of achievements under Nohria’s leadership, among them the launch of the online learning platform Harvard Business School Online (previously called HBX), a fundraising campaign that raised nearly $1.4B, and a pledge to include twice the number of women in the school’s case studies, announced by Nohria himself. “[Nohria] has affirmed HBS’s longstanding commitment to educating leaders who will make a difference in the world, while pursuing that mission in imaginative new ways,” Harvard University President Lawrence S. Bacow wrote in a separate email. Although the school has not launched a search for a new dean yet, Bacow wrote that he and University Provost Alan M. Garber will take on the task soon.

Previous Entry
Common GMAT Concerns: Taking the Test Again and Dealing with a Low AWA Score
Next Entry
MBA Admissions Myths Destroyed: My Work Performance Is All That Matters