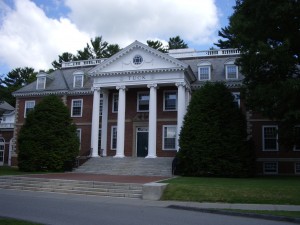 The Stanford Graduate School of Business may have nabbed the top spot in the recently published 2019–2020 Bloomberg Businessweek ranking of U.S. business schools for the second year in a row, but Dartmouth College’s Tuck School of Business was arguably the biggest winner: the school came in second after jumping a whopping 17 spots from its 2018 finish. Bloomberg Businessweek released its global and national MBA rankings in a combined list last year for the first time, and the 2019 U.S. ranking is indeed just a preview—the full list, including international schools, will be released later this year.

The Darden School of Business at the University of Virginia also improved its standing from 2018 by gaining four places and landing in the fifth spot. Similarly, the UCLA Anderson School of Management was 17th last year and 12th this time. The year’s most notable drops in ranking included Duke University’s Fuqua School of Business, which fell five spots to 20th place, and the USC Marshall School of Business, which was ranked 13th in 2018 and 22nd in 2019. The Wharton School of the University of Pennsylvania fell slightly to sixth place, after finishing second in 2018. Stay tuned to see whether the international schools will gain or lose their momentum in the 2019 global Bloomberg Businessweek ranking!