B-School Chart of the Week: How Many Candidates Would Reapply If Not Admitted?

Top-ranked business schools are charged with the task of filling a very limited number of seats in each class by selecting from a wide pool of the most competitive candidates in the world. Consequently, being denied admission in a given year does not necessarily mean that you are underqualified or not business school material. To the question “If you are not admitted to any MBA programs this year, will you try again next year?” we had 135 total responses (48 from international candidates and 87 from U.S. applicants). The majority of responses indicated that applicants are focused on gaining their MBA, even if they must try multiple times to gain admission to business school.

Of all respondents, 64.4% said they would definitely reapply. This figure represents a midpoint of sorts between the percentages for the two groups separately, with 72.9% of international candidates saying “yes” and 59.8% of American applicants expressing the same surety. The percentages of respondents who said they would not be reapplying was relatively similar for both groups—5.7% of U.S. candidates and 4.2% of international ones—with the overall percentage being 5.2%. Naturally, then, the proportion of international respondents who did not know whether they would undergo the application process again if they were not successful this time was smaller than that of U.S. applicants—22.9% versus 34.5%, respectively—perhaps indicating a slightly higher level of focus on the degree among non-American candidates. 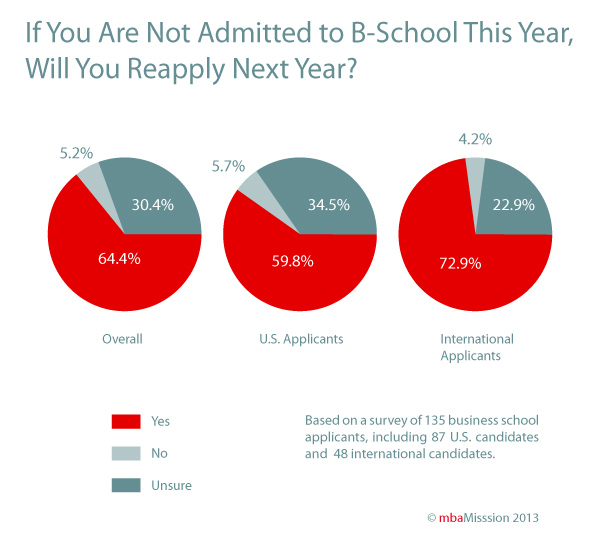