B-School Chart of the Week: How Many “Unicorns” Were Founded by MBAs?

The billion-dollar tech start-up—that ultimate entrepreneurial fantasy—is an elusive creature. Earlier this month, TechCrunch compiled a list of 39 companies that belong to what it calls the “Unicorn Club”—that is, “U.S.-based software companies started since 2003 and valued at over $1 billion by public or private market investors.” Of the approximately 60,000 total software- and Internet-related companies funded in the past decade, these unicorn companies comprise only .07%, or one in every 1,538. With an average of four of these companies emerging each year, the odds of starting or investing in a billion-dollar start-up are reportedly “somewhere between catching a foul ball at an MLB game and being struck by lightning in one’s lifetime. Or, more than 100x harder than getting into Stanford.”

TechCrunch has drawn a number of interesting conclusions by examining these companies. Among them, it seems that San Francisco has overtaken Silicon Valley as the home of most unicorns. Still, Menlo Park–based Facebook stood out as an even rarer species: a “super-unicorn,” accounting for nearly half of the $260B aggregate value of all the companies on the list. In addition, while consumer-oriented unicorns have apparently created more aggregate value, enterprise-oriented unicorns ultimately showed a higher return on private investment.

But one observation that may be particularly intriguing for MBA hopefuls was that successful unicorns tended to consist of “well-educated, thirtysomething co-founders who have history together.” Challenging the myth that all major tech start-ups are built by self-taught prodigies, the list reveals that many such companies begin as a sustained collaboration between well-informed, like-minded entrepreneurs—the sort of collaboration that occurs, perhaps, in the more experimental learning environment of business school. Consequently, we at mbaMission wondered just how many unicorn companies were actually started by business school–educated entrepreneurs.

By our count, 13 of the 39 companies (or approximately 33%) had at least one founding member with an MBA: 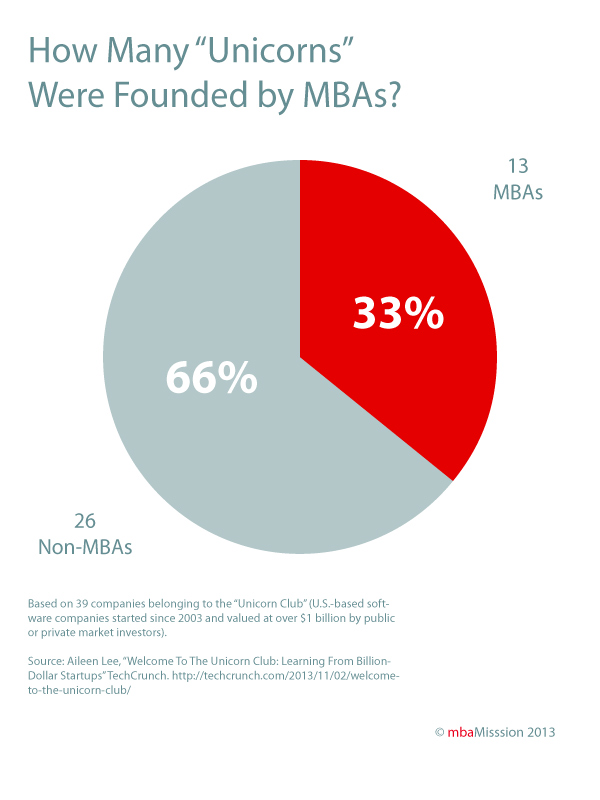 Previous Entry
Dean Profiles: Sunil Kumar, The University of Chicago Booth School of Business
Next Entry
Diamonds in the Rough: An MBA for Working Professionals at Villanova