More straightforward (and inexpensive) ways of meeting that special someone are probably available than entering business school. Nonetheless, student life confers a unique opportunity for blossoming romance and strategic mergers—after all, those late night case study review sessions need not be so lonely. As evidenced by the number of MBAs marrying other MBAs this month, the cutthroat world of business appears to have a romantic side.

Two Harvard Business School (HBS) couples, for example, were included among the announcements: Rebecca Arnold and Jean Ann Salisbury, who met at HBS, and Elizabeth Berylson and Robert Katz, who are entering their second year of the program this fall. Wharton weddings abounded as well, including that of alumni Lisa Harris and Greg Millhauser. There was also the inter-MBA matrimony of Wharton alumna Leigh Enoch and recent HBS alumnus Arthur Wit. From Yale, Sara Aviel and Martin DiMarzio tied the knot this month, and Arianne Field, a second year at Columbia Business School (CBS), was married to Cornell Johnson alumnus David Perry. Emily Hutchins and Eugene Peroni III, students at Johnson, were also among the newlyweds.

Approximately 20% (175) of the total 848 wedding announcements in the New York Times since the beginning of 2013 have included an MBA candidate, student or alumnus/alumna. Taking a look at the past six months, we have seen a steady climb in MBA weddings over the summer, particularly in the case of HBS (with seven mentions for the month of August alone) and CBS (nearly tripling its number of mentions since May). 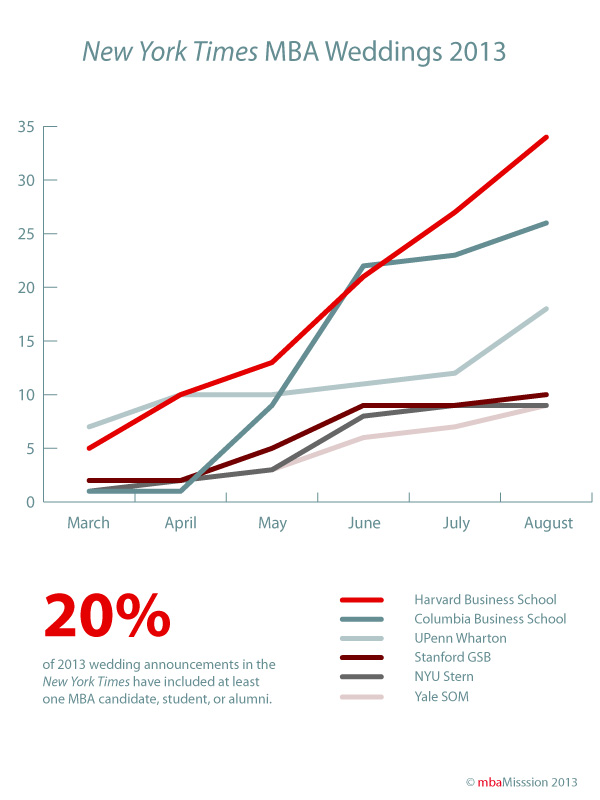