B-School Chart of the Week: How Important Are Rankings?

A total of 132 candidates—84 from the United States and 48 international—responded to our survey question “How important are rankings in your choice of business school(s)?” Candidates were asked to respond with a number between 1 and 10, with 10 indicating the highest level of importance. While the data we collected clearly suggest an overall tendency to view a school’s ranking as important, the trend seems slightly more pronounced among U.S. applicants, for whom the average rating was 7.6, compared with just 6.8 for international applicants. The most frequent rating in aggregate—as well as among U.S. applicants and international applicants, when analyzed as separate groups—was 8, just a little higher than the overall average rating of 7.3. Still, for some candidates, rankings did not appear to be a significant consideration in deciding which MBA program to target, given that 4.5% of respondents indicated a rating of just 1.

Remember, keeping an eye on how well your target school stacks up according to Bloomberg Businessweek, U.S. News & World Report or the Financial Times may be worthwhile, but as we have emphasized before, fit trumps rank. 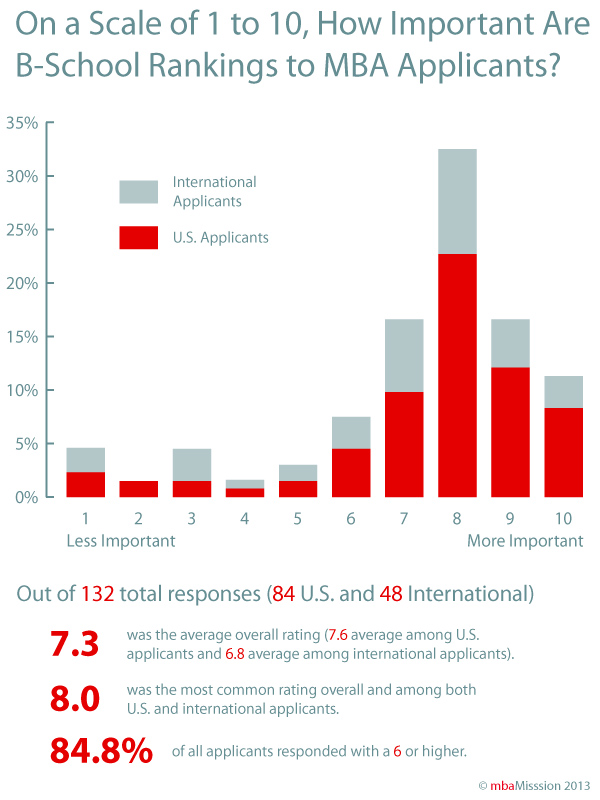 Previous Entry
Professor Profiles: Eric Sussman, UCLA Anderson School of Management
Next Entry
Beyond the MBA Classroom: A Day at the Beach at Fuqua