B-School Chart of the Week: Whose Follies Are the Funniest?

The end of the academic year spells relief for students of all kinds, but those in business school know how to cap off the spring semester with comedic flare. As highlighted by Bloomberg Businessweek this week, students across various top-ranked business programs take part in the annual tradition of MBA Follies—writing, directing and performing sketches that capture the quirks and idiosyncrasies of their respective institutions and of MBA life at large.

Follies sketches are often posted on YouTube, so we thought taking a look at which 2013 productions are garnering the most acclaim might be interesting. As of today, Wharton’s “MBAs Assemble a Malm Bed from Ikea”—which envisions Wharton, Stanford GSB, Kellogg, Harvard Business School (HBS), Chicago Booth and INSEAD students trying their hand at Scandinavian furniture assembly—seems to be taking the lead, with more than 43,000 views (of course, Wharton’s large class size might have something to do with that). A trailer for the HBS parody of Mean Girls is the runner up, with nearly 2,500 views. Columbia Business School offered a spoof called “The Munger Games,” with nearly 2,000 views, which depicts MBA students competing for the chance to work under Berkshire Hathaway’s vice chairman, Charlie Munger. Cornell Johnson’s “Recruiting with Bain” (a play on the homophonous Batman villain) seems to be neck and neck with NYU Stern’s rap music video “Zacklemore.”

Other sketches that have surfaced on YouTube include Michigan Ross’s “Terry Tate: Office Linebacker,” UVA Darden’s nod to Dos Equis with “The Most Interesting Man in Business School,” MIT Sloan’s globetrotting trailer for “Where’s Rod?” and a number of sketches from Chicago Booth students, not least of which is “Admit Weekend at Bernie’s.” Popularity might not be the best measure of humor, but we think it is probably best that these aspiring comedians will have an MBA to fall back on. 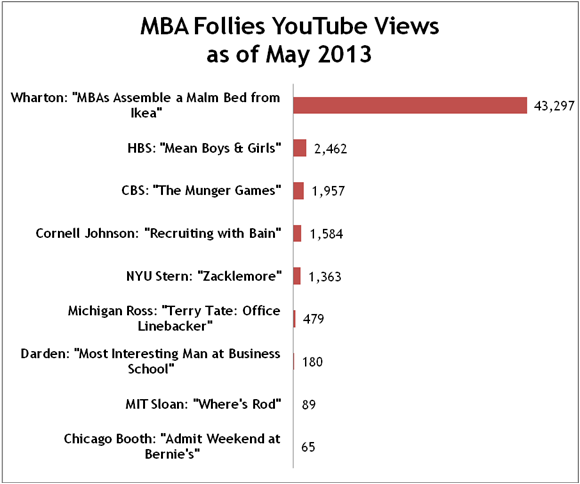 Previous Entry
Diamonds in the Rough: New York Consulting Experience at Fordham
Next Entry
Beyond the MBA Classroom: Winter Carnival at Dartmouth Tuck