B-School Chart of the Week: How Many MBAs in the Time 100?

Time magazine’s annual “Time 100” list was published earlier this month, and we thought tallying the number of MBAs featured among the most influential people in the world would be an interesting exercise.  By our count, business school graduates make up approximately 4%, with three included in the “Titans” category and the other in the “Leaders” category.

Moreover, two of the “Titans” are Harvard Business School alumni: Palaniappan Chidambaram, the Indian finance minister who received his MBA in 1968, and Sheryl Sandberg, the chief operating officer of Facebook, who earned her MBA from HBS with the highest distinction in 1995. The other “Titan” included on the list was OkCupid co-founder and current CEO of Match.com, Sam Yagan, who graduated from the Stanford GSB in 2005. The sole business school graduate in the “Leader” category was Enrique Peña Nieto, the president of Mexico, who earned his MBA from the Monterrey Institute of Technology and Higher Education. 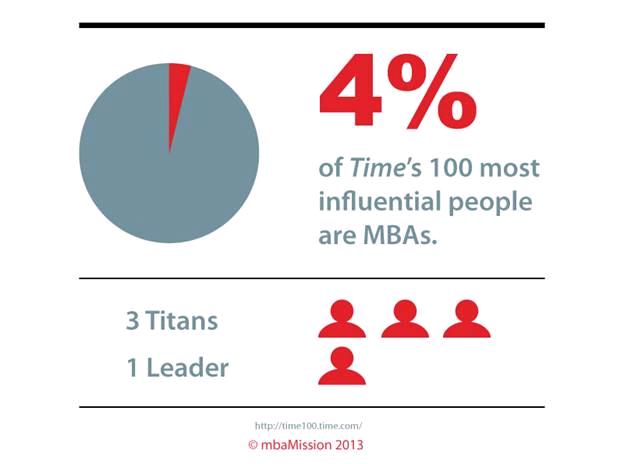