What I Learned at…Wharton, Part 2

In our “What I Learned at…” series, MBAs discuss the tools and skills their business schools provided as they launched their careers.

Moran Amir, commonly referred to as “Mo” by her peers, is a second year at the Wharton School at the University of Pennsylvania and the co-founder of ADORNIA Fine Jewelry, the online destination to learn about and shop for fine jewelry. By applying innovative editorial content and fashion merchandising to the fine jewelry segment, ADORNIA reintroduces the art and tradition of jewelry to a modern generation of women.  In Part 2 of this series, Mo describes to mbaMission how her learnings in the first year at Wharton complemented her retail industry knowledge and helped her conceive of ADORNIA. 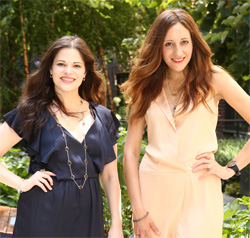 In March 2012, the second semester of my first year at the Wharton School at the University of Pennsylvania, my business partner and classmate, Becca Aronson (aka, Bex), and I conceived of ADORNIA Fine Jewelry, the online destination to learn about and shop for fine jewelry. Many of our classmates came to Wharton already knowing their career goals for the summer and had successfully secured their internships by the end of January. For Bex and I, both seasoned fashion industry professionals, the answers were less clear. After pondering our internship options for the summer between our first and second years at Wharton, we decided in April to make building ADORNIA our internship and top priority.

We closed our eyes and believed ADORNIA was an educated bet. After years of working in the fashion industry, Bex and I had paid our dues with significant sweat equity that could be poured into a successful new fashion concept. The summer months presented a less risky trial period in which to found and start to grow the company. Herein lies the benefit of a full-time MBA program: a place to experiment with your career, to challenge and heighten your prior business experience and to legitimize it all under the mantle of being a student. The opportunity costs of not interning over the summer for both Bex and I did not outweigh the learning experience and career potential that bringing ADORNIA to fruition offered.

We had first started to flesh out our idea for the business during the early days of meeting at Wharton but pivoted the concept significantly before putting pen to paper on ADORNIA by mid-March of our second semester. In between, we undertook quite a bit of learning in Huntsman Hall that helped us take the business idea from its half-formed, nascent stage to an operating and quickly growing start-up. I can certainly speak for my academic experience in this essay. My first-year coursework at Wharton coalesced with my industry background and allowed ADORNIA to happen.

In an introductory-level entrepreneurship class I took in the second quarter of the first semester—“Entrepreneurship” with Professor Ethan Mollick—our final project required us to conceptualize a business and concretize it with a business plan. Though ADORNIA was not the final project I submitted, the search for a plausible business idea to satisfy the course requirements prompted me to further research the apparel and accessories markets. I grew interested in fine jewelry after months of reading about the jewelry trade in publications such as eMarketer and Women’s Wear Daily, provided as part of Wharton’s extensive business resources at Lippincott Library.

I learned that the online jewelry segment had experienced consistent double-digit growth over the past several years—including 17% between 2010 and 2011. Online jewelry sales also represented the third fastest-growing e-commerce category and the first fastest-growing e-commerce fashion category. By applying a market-sizing approach I learned in my introductory-level entrepreneurship course, I gleaned that fine jewelry represented a $42 billion market, but only 8% of that market—$4.3 billion—was transacted in the online setting. Men’s acquisitions of unfinished diamonds for bridal purposes comprised the vast majority of that $4.3 billion market.

A huge prospect appeared to me to bring a non-bridal perspective to fine jewelry sales online. To further support my nascent business vision, I applied the lessons I learned in Professor Dan Levinthal’s core “Competitive Strategy” course to analyze the competitive landscape in the online jewelry market and to carve out a strategic position. By plotting those companies on a two-by-two matrix chart, I could see that this burgeoning market needed a fine jewelry destination with a fashion approach and discovery-driven content model to effectively compete with the existing jewelry players. Enter ADORNIA.

University of Pennsylvania (Wharton) What I Learned at...