MBA News: Tech Crunch Launches Debate on Whether an MBA is a Plus or a Minus in the Start Up World

In an article that launched a Twitter war among vocal authors on the subject of entrepreneurship (including Guy Kawasaki of Apple fame) Vivek Wadhwa,  Senior Research Associate at Harvard Law School and Director of Research at the Center for Entrepreneurship and Research Commercialization at Duke University, claims that the investment in his NYU-Stern MBA, while a questionable choice in his early alumni years, proved to be the best thing he ever did for his entrepreneurial career. To paraphrase Wadhwa, his MBA helped well enough when he was a young professional, moving through the ranks of the CSFB IT department, but when he spun off a startup company, of which he became the CTO, his MBA really started to pay dividends. The reason was simple, he said. “In the startup world, it’s simply survival of the fittest. You have to involve yourself with almost every aspect of the business—and use all skills.” In Wadhwa’s case, he felt hat his MBA had been preparing him all along to manage budgets, market and sell, set strategy, hire, and review legal contracts — preparing him to face the diversity of these challenges. As we followed the argument on Twitter, Wadhwa later shared a study he had completed years before, suggesting that MBAs start companies more quickly after completing their education than do college graduates and other degree holders. 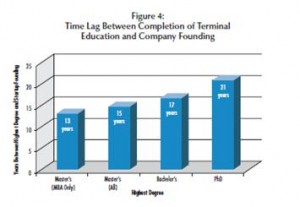